This website is reader-supported. When you buy through links on our site, we may earn a small affiliate commission at no extra cost to you. Read More..

There is a common misconception among many people that all dirt bikes come with kickstands, which is not true. For dirt bike racing, manufacturers don’t add the kickstand to the stock machine deliberately so that it will be lighter than the stock bike, and therefore, be able to handle extreme conditions, such as tricky terrain and dangerous maneuvers, in which dirt bike racing takes place.

Dirt bike stands are designed to prevent your dirt bike from tipping over when it’s not out on the track or when you’re not riding it. As the name suggests, these stands are usually made of some form of sturdy aluminum or steel, and they usually look like a large stool with a wide base and are used to support the bike from the chassis.

A Dirt bike stand is a tool that is used to elevate the bike and support the bike’s weight during routine maintenance on the bike. By placing your bike on the stand, you will be keeping your wheels elevated so that there will be no suspension and tire problems caused by long-term lack of use.

Every type of stand has its own uses and advantages, and there are a variety of models available. Here are the most common perspectives and their uses:

It is a portable kickstand, which makes use of metal triangle stands that are mounted on the axle of the back wheel.

The triangle stands to allow for the same angle to be created as with a kickstand. The dirt bike can easily be placed under the air compressor and the air can be removed from the dirt bike for general maintenance.

Most racers prefer fixed stands, which come in standard sizes and are designed to perfection, as they are manufactured to perfection. On rough ground, it is able to elevate the bike from the chassis to the correct position because of its perfect size and lightweight construction.

There is, however, a problem with most stands because they are unable to accommodate all bike chassis, which results in either the front wheel or the rear wheel touching the ground.

There are two types of hydraulic stands: scissor stands and hydraulic stands, which are both used in order to raise a bicycle above the ground using a foot pedal. As one of the most popular portable bike stands, this is the one that is most commonly used by professionals.

An invention comes from necessity, as it is said, and Lift Stands are designed to adjust the height of a bike above the ground so that it can be repaired and fixed.

These lift stands work similarly to those that are used for cars for maintenance and repairs making them the most useful stand for dirt bikes. In order to raise the height of the vehicle and you need to do that by pumping up the lever, it is all you need to do.

There is, however, a problem with most stands because they are unable to accommodate all bike chassis, which results in either the front wheel or the rear wheel touching the ground. 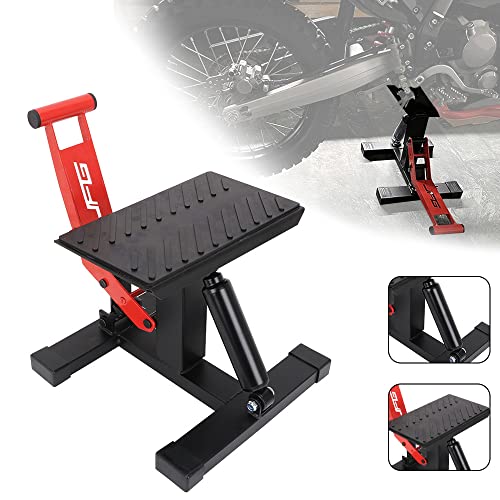 Here are a few needs for a Dirt Bike stand:-

With your wheels lifted off the ground with a dirt bike stand, cleaning your wheels is simpler than ever. The pressure of the water from a powerful hose will aid in keeping the wheels spinning as you clean them.

While changing the bike’s fluids

Your engine will burn out in the middle of a race if you don’t change the oil on your dirt bike. The way you utilize your stand will alter slightly from how you normally use it while performing an oil change.

You’ll need to move the dirt bike back a bit so that the stand rests between the front wheel and the chassis rather than letting the chassis rest on the stand. This will allow you to place your oil pan and keep your dirt bike steady while you change the oil.

The dirt bike stand comes in handy for a variety of applications, including if you are looking to upgrade your performance by adding high-end tires or simply replacing a busted tire if you have fallen over.

Dirt bike stands are useful for preventing flat spots from developing on your tires. If you have a flat spot on your tire, you will experience uneven riding, vibrations, and shaking, as well as general tire stiffness. 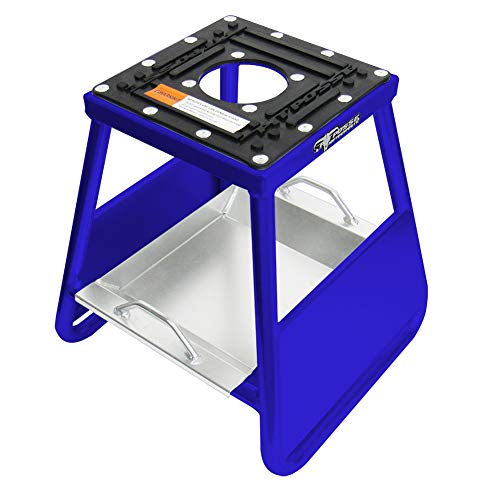 There are many reasons why dirt bike stands are useful. Cleaning, repairing, and storing your bike are all easier with this system.

Using a dirt bike stand would reduce the risks that come with not using one. So it is better to invest a little and get a strong and durable dirt bike stand for your new dirt bike.